Antifragility: a keyword for leaders that want to reinvent their businesses in the Web3 era

In this article, Andrea presents an innovation model for the world of Web3, where by combining the use of Metaverse and Blockchain, it is possible to maximize the feedback from your experiments, and minimize their cost.

I would like to start here by asking you the following question: “Why are we afraid of making mistakes when we lead our companies?”. Think about it.

I know your answer is kind of obvious: “Because we don’t like the consequences of mistakes, Andrea! What a silly question.”

You’re right on the one hand: yes, we avoid mistakes because we hate their consequences.

But on the other hand, this question is not silly, because I want you to think with me: what are these consequences?

I’m sure it will be easy for you to list the main and most obvious ones: first, costs! In addition, frustration, loss of customers, reputation problems, inefficiencies, and many more things.

But I want to rephrase the question differently: “What can be the positive consequences of mistakes?”.

Learning is one. The possibility of fostering collaboration is another (think about it, by making a mistake and sharing the mistake with me, you are giving me the chance to help you). Discarding wrong paths when we don’t know where to go is one more. In addition to all this, mistakes can make us stronger because it makes us more prepared for the following times, based on these learnings, and so on.

The most interesting thing of all is that when we understand that we can learn from mistakes, and that they can help us, we totally change our attitude towards them and start to experiment more.

That’s why we’re going to explore in this article how Web3 technologies like blockchain and NFTs can help us minimize the cost of experimentation, and maximize the learnings from it.

I want to ask you: do you think a scientist will discover something if she doesn’t allow herself to be wrong at times? Obviously not, because she won’t even start to experiment!

And you see, I understand a lot about how scientists think, because I grew up with one at home: my mother, who is a cancer cell researcher at the University of Genoa, in Italy, up to today. And when I was a teenager, I remember to this day that certain days she came back from work and would tell me: “Wow, son, today was a great day at work!”, I would get already excited and would imagine finally fulfilling my dream of becoming the son of a Nobel Prize winner.

But as soon as I asked her “Mom, tell me! What did you find out?”, she would look at me with a strange face and said “Andrea, I didn’t discover anything. Why are you even asking me?”. Then I replied: “But how do you consider your day to be a good day at work if you haven’t discovered anything?”. But the answer he gave me, taught me to this day the way in which we should look at mistakes in business. She said, “It’s because I managed to do a lot of experiments, and even though they all failed, I found many ways in which my hypotheses don’t work.”

Do you realize that sometimes learning from mistakes is more important than getting it right the first time for a scientist, because you learn so much more from it!

And why do scientists learn from mistakes? Because they control everything that happens in the lab, and monitor all the variables in order to learn from them. This is not true in business (where we don’t have all the variables under control! Think of the example of a pharmaceutical company: does it know in real time how the patient, for example, reacts to a new packaging when she grabs it in the store? Obviously not, as these are data that only pharmacies, that is, an intermediary, can monitor).

But that’s changing: in a world of Web3, and of the Metaverse that is 3d and immersive, everything is metrified – and consequently all our actions, experiments and pilots provide us with feedback, and that’s what we need to learn from any mistake!

Let’s go back to the example of different packagings in the world of Metaverse: if today the pharmaceutical company does not have visibility of the reaction of a new product packaging by the end consumer, when launching a new packaging in Metaverse the consumer will be able to measure for instance the dilation of the consumer’s pupil when they see the packaging for the first time, would measure the average time spent looking at the package, the percentage of customers who put it back on the shelf, the percentage who pick it up, and even the percentage of undecided people who stare at it without knowing what to do. If you compare these metrics with those of the control group, to which the  traditional packaging is displayed, the pharmaceutical company will know which packaging performs better. And in case the new package didn’t have the expected impact, well, at least the error was detected at the beginning, and it was easy and quick to act based on the learning. Think about how we were left in the dark in the pre-digital world, where we can’t metrify any of this – and mistakes then teach us little and nothing.

A clear example of this opportunity to better understand the customer in the world of Web3 comes from the fashion industry: the luxury fashion e-commerce Farfetch launched in August 2021 a functionality that allows people to pre-order clothes from Balenciaga, Off-White or Dolce & Gabbana which are only digital. The site collaborated with the DressX studio, which designs virtual clothes, to achieve the most convincing rendering possible of these pieces, which are then manufactured in the atelier only according to pre-orders – a format that is especially attractive for luxury brands like these.

But there’s another big point related to mistakes, besides the advantage of getting feedback: in the world of digital twins and perfect simulations, think about what else one of the big negative consequences of mistakes disappears from the map? Think about it: its costs!

In other words, the world of digital twins allows us to minimize the cost as much as possible: in the example above of the drug packaging, it is obviously much cheaper to simulate this through the Metaverse, than to have these packages produced, distribute them in selected pharmacies, wait for pharmacy sell-out data to arrive, analyze this data and on top of that recall if the test is not successful!

We really have to open up to the world of Web3, which allows us to create virtual copies of objects, environments and even real people, so that we can minimize the cost of experiments and, in this case, errors as much as possible. This applies in every sector: from the costs of clinical trials of new drugs (which can be done remotely through digital twins – that is, digital replicas of participants, created with health data measured in real time by wearables and sensors ), to experimentation with the assembly of a new car part on the production line (as BMW does, in partnership with NVIDIA), even simulations of dam breakage in the case of mining companies that can prevent, intervene and minimize the cost of your mistakes – which can sometimes be huge!

See a great example of this in the Metaverse: during the Covid-19 pandemic, artists, musicians, and even speakers like me, couldn’t perform in person and this stimulated their creativity to find alternative ways to engage with their fans and audience. And in the world of Metaverse, where as we said experimentation is cheap and gives us feedback, DJ Marshmello (who is also famous for being a gamer) teamed up with Fortnite (one of the most played games in the world, by Epic Games, and great example of a Metaverse) to do an experiment: he would do a show “inside” Fortnite (obviously inside a studio, but broadcasted in real time in the Metaverse) exclusive to the Fortnite audience – with no guarantee obviously that this would work: it might as well be that people spend time in Fortnite just to play games, not to watch shows. Even so, since the costs of such an experiment are minimized in the Metaverse, they went about it and did it. Result? More than 10 million people connected watching Marshmello’s show, which most likely was surprised to have his biggest audience ever in a virtual context.

Here the big message for leaders is that in the world of Web3 we need to understand that not all mistakes are bad, but that there is a certain category of error that we can define as “smart error” (which has certain characteristics: it is designed to give us some type of feedback, and its cost is minimized thanks to Digital), and that all this leads us to foster an antifragile culture within the company. What does that mean?

Think of a glass bar: if it falls to the ground it breaks, and you don’t do anything else with it. It’s fragile.

At the same time, think of a steel bar: if it falls on the ground, it doesn’t break, but stays there, on the ground. Nothing changes.

Now, think about a bone: if it falls and breaks, it calcifies again stronger, to better prepare for the next “blows”.

Realize? It is often said that companies have to be resilient, but resilience is not enough in the world of Web3: the term comes from the Latin word “resilire” which means “to return to a normal state”. In the world of Web3 and the Metaverse, where every trial and error provides us with feedback and is cheaper, the great skill of leaders is in creating an antifragile culture that encourages constant experimentation and learning from mistakes.

The goal is to fit into the right quadrant above in the matrix I developed, which measures an antifragile culture along 2 major axes: the degree of digitization and the degree of learning from mistakes. With this, it is possible to categorize organizations into 4 large quadrants, according to the image below: 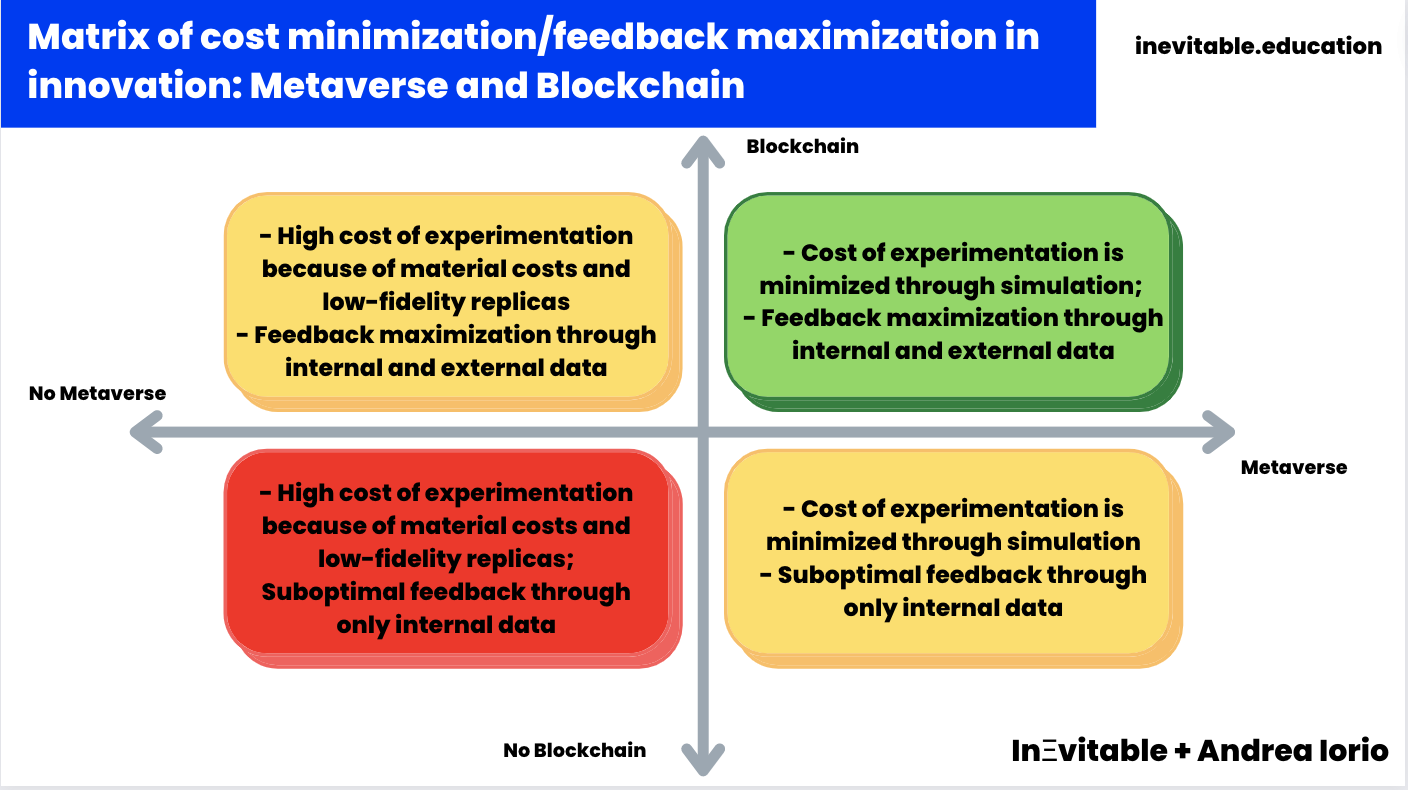 With more than 200 keynotes delivered (online and offline) in 2021 to clients across Brazil, Latin America, the United States and Europe, Andrea is today one of the most requested speakers on Digital Transformation, Leadership, Innovation and Soft Skills in Brazil and globally. He has been the head of Tinder in Latin America for 5 years, and Chief Digital Officer at L’Oréal. Today he is also a best-selling author, and a professor at the Executive MBA at Fundação Dom Cabral.